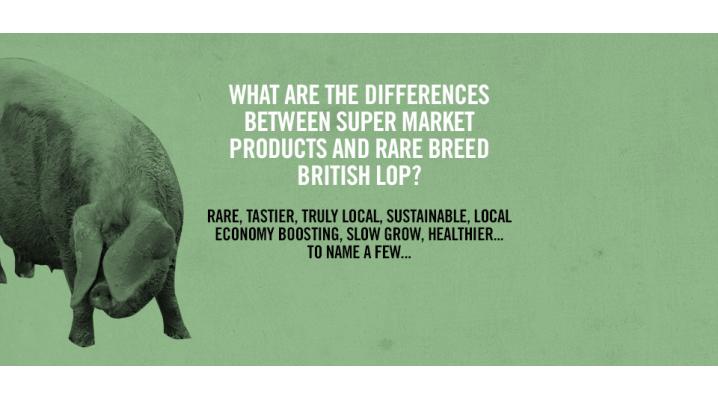 For most of its history from the early years of the twentieth century, it remained a local breed, undiscovered by farmers outside its native territory. It suited the locality well and was in strong demand there so there was little incentive for breeders to go shouting its merits beyond the far south west.

In those days it was registered and known as the National Long White Lop Eared breed. In the 1960s, the name was changed to today’s British Lop.

At the end of the war in 1945, the UK needed to maximize food production. The 1947 Agricultural act was passed and stated:

"The twin pillars upon which the Governments agricultural policy rests are stability and efficiency."

The government consequently recommended that British pig farmers focused on more commercially viable breeds such as the Large White, the Landrace and the Welsh pig. The British Lop was marginalised, bred only by a handful of farmers in the West Country.

When the Rare Breeds Survival Trust (RBST) was established in 1973, the Lop was listed as one of the six rare pig breeds recognised by them. The inclusion of a breed as officially listed as ‘rare’ generally increased interest in all such breeds and indeed the Lop is more populous now than at any time in the last 30-odd years. However, it suffered, in comparison with the other rare breeds of swine, by not looking particularly distinctive. It is, after all, as its earlier name says, a white lop-eared pig and to the non-specialist, could be confused with the Welsh or the Landrace. Instead, enthusiasts flocked to pigs with short snouts, spotted or ginger hogs but not so readily to the pig that looked quite norma