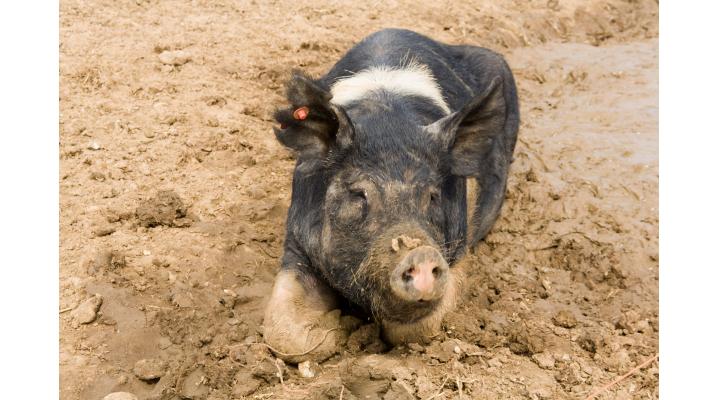 The Hampshire Breed has been developed in the United States of America and is now one of the World’s most important breeds.

In some respects the Hampshire can be regarded as a ‘British Native’ Breed, as the original breeding stock was imported from Wessex, UK in 1832, the date being recorded in the “Hampshire Blue Book” published in 1928. The book records the complete history of the breed and its origin.

From the time of its arrival in the USA until 1890 the breed was called “The Thin Rind” breed, due to the abundance of lean meat it produced.

At a meeting of American breeders in 1890 the breed was renamed the Hampshire, as the original pigs were imported from a farm in Hampshire, Wessex, UK. A Breed Society was established at the same time and herd book recording can be traced for more than 100 years.

The Hampshire is used extensively as the sire of cross bred pigs for the pork and manufacturing markets in the USA and many other countries. It has the reputation of being the leanest of the North American Breeds and the majority of carcase competitions in North America are won by Hampshires and Hampshire crosses.

The first Hampshires in the UK were imported from the USA in 1968 by the ‘Animal Breeding Research Organisation (ABRO). The import was a ‘random sample’ of the breed. The pigs were extensively performance tested prior to being released to British breeders.

The next major importation was in 1973 when 40 pigs from many different USA bloodlines were imported from Canada (import restrictions prohibiting direct imports from the USA at that time). This importation was very carefully selected and included a boar that was grand champion at the 1972 Toronto Royal Show. This same boar was breed champion at the English Royal Show in 1975.

The British Hampshire, both pure bred and crosses, have won many interbreed championships at the Royal Smithfield Show, London for carcases and live pigs.

During the 1980s and 1990s several new blood lines have been imported from the USA by embryo transfer and boar semen.

In the world of commercial pig production there is certainly a place for the Hampshire, still regarded by many as the best terminal sire breed for all purposes.