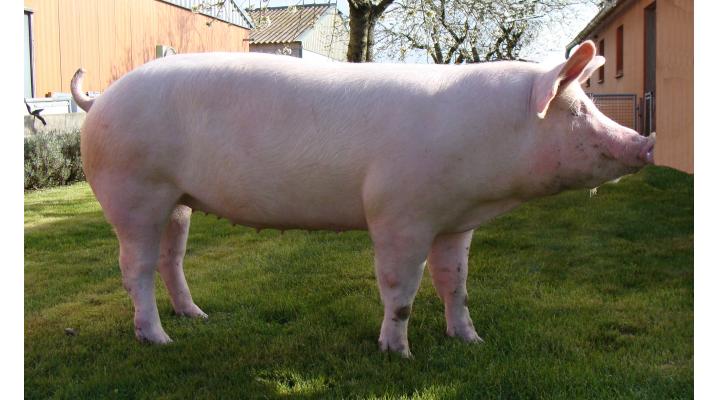 First recognised in 1868 the Large White owes its origins to the old Yorkshire breed. The Large White was one of the original founder breeds of the National Pig Breeders' Association (now known as the British Pig Association) and the first herdbook was published in 1884. Large Whites are distinguished by their erect ears and slightly dished faces. They are long-bodied with excellent hams and fine white hair and, as their name suggests, they are characterised by large size.
The early history of the breed in Yorkshire is difficult to trace. The large, coarse-boned and leggy white pigs of the region were crossed with other breeds. Davidson, in 'The Production and Marketing of Pigs', has suggested that among these were the Cumberland, Leicestershire and the Middle and Small White. Specimens of the new breed first attracted attention at the Windsor Royal Show in 1831 .The stock used in the development and improvement of the pigs of that area is not as important as what was finally produced as a breed.
Before the end of the 19* Century, British Large Whites were already establishing themselves all over the world. Innovative pedigree breeders, such as Sanders Spencer of the Holywell herd near Huntingdon, were exporting breeding stock as far afield as Australia, Argentina, Canada and Russia as well as most countries in Europe.
The Large White has proved itself as a rugged and hardy breed that can withstand variations in climate and other environmental factors. Their ability to cross with and improve other breeds has given them a leading role in commercial pig production systems and breeding pyramids around the world.
While the Large White was originally developed as an active and outdoor breed, they do very well in intensive production systems. They and their descendants, the Yorkshire, are to be found in practically all crossbreeding and rotational breeding programmes using two or more breeds. The sows of the breed have an enviable reputation as dams and form the foundation of the classic Fl hybrid gilt. Modern breeding programmes have developed separate sire and dam lines to produce purebred Large White terminal sires that excel in growth rate and lean meat percentage and are incorporated in most terminal sire breeding programmes. They can definitely stamp uniformity and quality on a pen of pigs from almost any breed or type of dam.
In the early 1970's the development of modern performance testing programmes led to an increase in world-wide demand for Large White breeding stock from the United Kingdom. In the first three years of that decade more than 8,500 pedigree Large Whites were exported to all parts of the world. Once again in the early 1990's, the switch in the USA from payment on liveweight to payment on lean meat percentage led to another great wave of exports of Large White genetics from Britain. The leading British breeders of today have followed in the footsteps of their Victorian predecessors with exports to over 60 countries around the world justifying the Large Whites' undeniable claim to be the World's Favourite Breed.