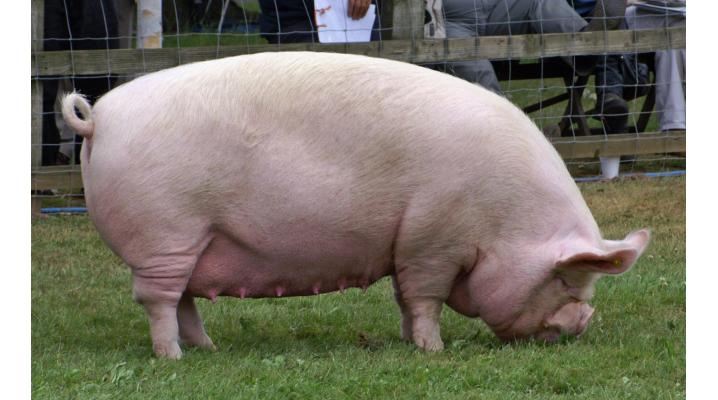 The Middle White was first recognised as a breed in 1852 in most unusual circumstances. At the Keighley Agricultural Show in West Yorkshire, Joseph Tuley, a weaver by trade, exhibited several of his famous Large White sows along with other pigs. The judges could not agree, as some of the animals were not considered sufficiently large for the class, and “as the merits of these pigs were so extraordinary, entirely forbidding recourse to disqualification, a committee was summoned, whereupon the judges declaring that, if removed from the Large White class the pigs would not be eligible for the Small White class”, it was decided to provide a third class and to call it the “Middle Breed”. In this way the “Middle White breed was established.

The Small White had been developed for showing and derived from crossing the local pigs with imported Chinese and Siamese pigs, from which it inherited the dished face, so much the characteristic of the Middle White.

Due to the “new” breed’s eating qualities, its early maturing and its very easy management, the Middle White went from strength to strength. When the National Pig Breeders Association was founded in 1884 the Middle White along with the Large White and Tamworth were the three foundation breeds and their first Herd books were published that same year.

The Middle White remained very popular with butchers everywhere, particularly in London where the breed was known as “the London Porker” as the carcases could be cut into the small joints favoured in the first part of 20th Century.

The Second World war and meat rationing until 1954 led to a concentration on the “bacon” pig and the specialist pork pig was sidelined. Along with other “pork” breeds the numbers of Middle Whites declined sharply during this period. Fortunately a number of dedicated breeders ensured the continuation of the breed. In recent years the demand for meat with good eating qualities has once again led to Middle White pork appearing on the menus of top London restaurants, with “glowing reports” regarding its outstanding quality.

Middle White breeding stock has been exported world wide, and the breed is particularly appreciated in Japan where they are known as “Middle Yorks”. The Middle White has many assets. It is very easily managed. It is docile and can make a contribution to cross breeding programmes to improve eating quality.

The Middle White Pig Breeders Club established in 1990 has as its Patron the well-known chef Antony Worrall Thompson whose enthusiasm for the breed has led him to breed his own Middle White pigs.