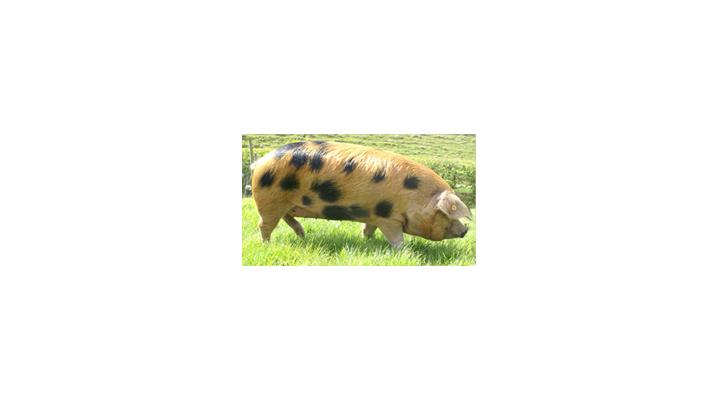 The Oxford Sandy & Black Pig, sometimes referred to as the “Plum Pudding or Oxford Forest Pig” is one of the oldest British pig breeds. It has existed for 200-300 years. The exact origin of the breed is lost in antiquity but the original Oxford Sandy & Black is believed to have developed some two centuries ago in Oxfordshire.

The Oxford Sandy & Black or OSB has reached crisis point at least twice in it’s past when numbers dropped so low that extinction was a real possibility. Unfortunately it had no Society or herd book to look after it’s wellbeing. As long ago as the 1940’s, boar licensing had dropped to one or two a year for OSB’s. If it wasn't for a few dedicated breeders, the breed would surely have been lost. In 1973, the Rare Breeds Survival Trust was formed giving hope for the breed, but the Trust decided not to recognise the OSB. Once again the dedicated breeders were on their own. The decline continued to the brink of extinction when in 1985, the current Breed Society was formed following contact with all known breeders of the OSB by the Society's founder secretary Steven Kimmins, ably supported and helped by Chairman Andrew J.Sheppy and President Geoffrey Cloke. The breed owes a great debt and its' survival to them.

There were 29 herds listed in the first herd book with 15 Boars and 62 Sows. Sadly some of the bloodlines have been lost, but today’s dedicated and enthusiastic breeders are determined to save the remaining lines.

The current picture is very encouraging with the rarest bloodlines hanging on and slowly increasing. Hopefully the Breed is at last safe (although still relatively few in number) Recognition by, and transfer of herd book management to the BPA from the Oxford Sandy and Black Society has already brought the hoped for benefits of increased publicity and opportunity to compete in the shop window of BPA recognised shows.

Breed numbers have been increasing over the last few years. There are 4 male and 13 female bloodlines within the breed.