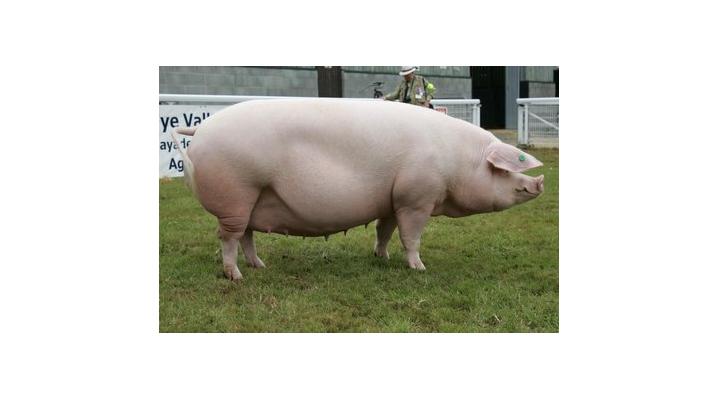 The earliest references to a Welsh pig come from the 1870’s when there was a considerable trade in Welsh and Shropshire pigs into Cheshire for fattening on milk by-products. “The Welsh pigs are generally a yellow-white, but some are spotted black and white. The (Cheshire) dairymen depend more on these Welshmen and proud Salopians than on breeding. The cross of the Manchester boar with the Shropshire and Welsh produces a larger and coarser breed than the small Yorkshire.”

The Welsh breed prospered greatly during the period from 1947 when increasing supplies of animal feed led to a dramatic increase in the national pig herd. The number of government licenses issued for Welsh boars increased from 41 in 1949 to 1,363 in 1954, making the Welsh the number three sire breed in Great Britain behind the Large White and Landrace. A similar picture existed for pedigree sow registrations, which rose from 850 in 1952 to 3736 in 1954.

The Howitt Committee established in 1955 to advise government on future breeding policy and which included amongst its members the eminent scientist Dr J. Hammond, identified the Welsh as one of the three breeds on which the modern British pig industry should be founded. “It is from these three breeds we would hope to see developed, through intensive progeny testing in the coming years, the improved bacon pig which would provide boars for use by nearly all commercial breeders for bacon and pork.”

Nucleus herds of Welsh pigs were established as part of the national testing scheme and throughout the 60s and 70s’ the breed was the third most numerous in the testing programmes. The 1974/75 Pig Improvement Scheme Year Book shows performance figures on a par with the other two breeds selected by the Howitt committee. During this period the Welsh breed was widely used in commercial herds. At the same time breeders with a slightly different type of Welsh pig were winning awards in the Show ring. At Smithfield and other Primestock shows the breed enjoyed numerous successes in both the pork and bacon sectors.

The Welsh pig is white, with lop ears meeting at the tips just short of the pig’s nose. It has a long level body with deep strong hams and legs set well apart. George Eglington acknowledged as the founder of the modern Welsh breed described the perfect Welsh pig as “pear shaped” when viewed from either the side or from above. They are still known for their hardiness and ability to thrive under a wide variety of conditions, both indoor and outside.

Since the 1980’s the number of registrations has declined however the breed still provides a valuable source of genetic material for breeders following crossbreeding programmes. They make for ease of management with fast liveweight gain at low feed conversion ratio and an excellent killing out percentage in the progeny. Currently the breed has 14 boar lines and 32 Sow lines.