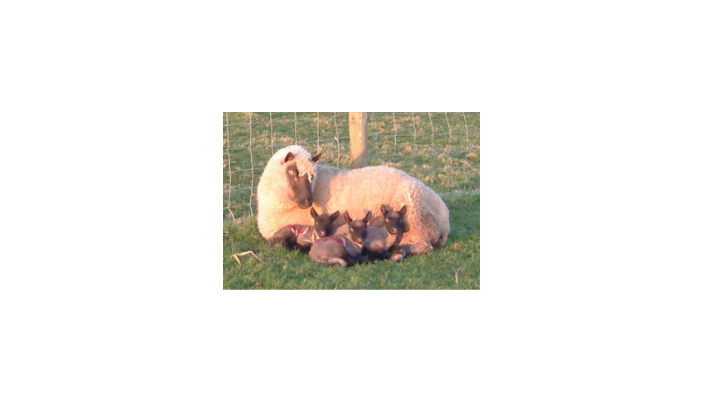 The Clun Forest breed takes its name from the old town of Clun and the surrounding forests.  It is situated in the southwest corner of Shropshire and is bordered by Montgomeryshire and Radnorshire.  At the beginning of the 19th century there were 12,000 acres of common land in this area.  The greater part of this land rose to an altitude of 1500ft and has the remains of “pounds”, “druid circles” and “Offas Dyke”.  At this time both the forest and common lands were inhabited by this breed of sheep hence the name. It is likely that pastoral or semi-nomadic shepherds who lived in the forest about 1000 years ago originally bred these sheep.

The Rev. Joseph Plymley, who wrote on the agriculture of Shropshire for the Board of Agriculture in 1803 quoted from a previous report dealing with these forest sheep.  He stated that upon the hills nearer Wales (this points to the Clun Forest) the flocks were without horns and had white faces. In 1837 Youatt confirms this, stating that the Clun Forest sheep were definitely white-faced and hornless.  However, he also mentions that the breed was fast changing their appearance.  This was caused by the crossing of other local breeds such as the Longmynd, Radnor & Shropshire, which was resulting in the darker colouring of the head. In 1892 W.J.Malden, whilst writing in the Royal Agricultural Journal, stated that, ‘A well bred Clun ram, as it now stands, is an imposing animal, one which demands admiration for all those who possess an eye to a sheep’.

In 1925 the Clun Forest Sheep Breeders Society was formed ‘to secure the purity of lineage and fixity of type’ and also to promote the virtues of the breed throughout the sheep industry.  A flock book has been published ever year since. Over the past 90 years the breed has retained all the positive attributes which has made it popular worldwide.  However, the ears are now carried slightly higher and the face is of a darker shade of brown. Since the societies formation the Clun Forest breed has spread from the ancient kingdom of Mercia all over the U.K. and Ireland, they have also been exported throughout Europe, Africa and North America.


BACK TO THE FUTURE?
The Clun Breed peaked as the most popular breed in the UK, until the fashion for hybids and continental breeds took over. However in the current age of autherity and people demanding value for money, means the Clun is a breed for the current economic climate.
If you want a sheep that is low input, easy lambing, easy to manage, has quality wool and an ability to thrive anywhere in the UK........then look no further!
There was a reason your grandfather had Cluns.....their quality of meat and the ability to produce it off grass alone, with low costs and good profit margins.